WH moves #ObamaPresser to 11:30. Guess he needed to press the snooze button a few more times.

He was going to be that late anyway. | RT @HuffPostPol: White House moves Obama press conference to 11:30 a.m. EST.

BREAKING: President Obama's 11:15AM press conference to begin in just 45 minutes from now.

Surely, the questions asked will be hard-hitting and insightful.

The press will pummel Obama with a barrage of hard hitting, incisive questions this morning.

Then I awakened from my dream.

Heh. So, while waiting, Twitter users are amusing themselves with some potential questions.

Also can he name all 57 State Capitals? RT @SHannitysHair: What is the capital of Israel?#ObamaPresser

What happened to the Broncos defense in the last minute of regulation?#ObamaPresser

Would you give yourself an A+ or an A++ for your first term grade? #ObamaPresser

Did you watch the Golden Globes last night?#ObamaPresser

Who do we blame the 2013 paycheck shrinkage on: Bush. Romney, Palin, or the flu? #ObamaPresser

If the economy continues to suck, will you continue to blame Bush?#ObamaPresser

Heh. Of course he will! Keep them coming, Twitter. 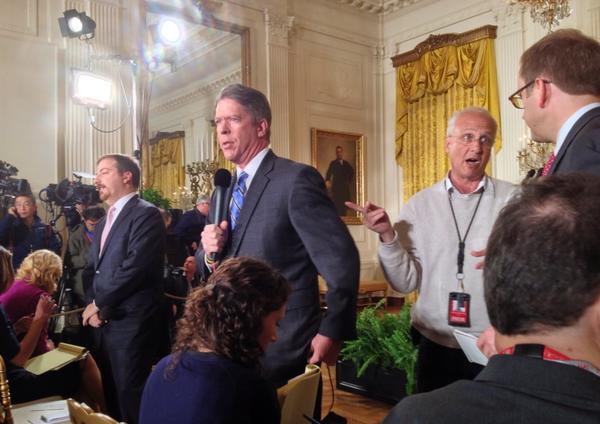 And a second hashtag enters the mix.

Waiting for the Just for Men to sink in #reasonsobamaislate