Bingo! But, surely the Smartest Man Alive ™ is never wrong! Except when he nearly always is, and today was no different. During President Obama’s surprise press conference, he prattled on about “magazine clips.”

Who is feeding him gun “knowledge“? Musket Morgan? Did Vice President Biden get such sage advice from the noted experts in Hollywood, then pass it along to the president? Or did he listen to some of these geniuses?

“These magazine clips”… @joenbc continues to beclown himself on guns.

Funny, I thought that was the term Andrea Mitchel used. Who is copying whom? RT @DLoesch: “Magazine clips” for AT-15 .233 apparently. Wow.

Heh. Lapdogs are feeding him!

The president is talking about "magazine clips" which are not a thing, and they are not two of the same thing, and he sounds uninformed.

Bless his heart! It would be hilarious, except that he is the President of the United States and has said that he will make gun-grabbing a part of his second term. Fundamental change and all! He is seeking to legislate something about which he knows nothing, evidently.

#Obama: "..that we can keep these magazine clips with high capacity out of the hands of criminals." You mean for these firearm guns?

So Obama just called an imagined gun part a "magazine clip." Do you even know what a gun is?

The mockery was fast and furious. And hilarious.

When I was a kid, I had a collection of “magazine clips” — clearly a horrible habit…

And he is the expert who will decide #2nd amendment fate?
“@southsalem: #ObamaPresser RT @DLoesch: Prez just said “magazine clips.” Oh my.”

All these meetings, and no one makes sure the boss understands basic firearms 101? RT @DLoesch: Prez just said “magazine clips.” Oh my.

@DLoesch Magazine clips, those are the articles you cut out of a monthly publication to save aren't they?

Maybe he just wants to ban these Magazine Clips because his picture isn't on the cover.

Astounded that the President of the United States is pushing gun control and cannot even describe terms he wants to control accurately.

Quote that could be real: "Guys, we have to ban these high velocity clipper magazines."

When progs are embarrassed over their complete lack of firearms knowledge, they always, always revert to schoolyard behavior.

No, you don't get to "mistakenly" speak about firearms when using that same knowledge base to make law on them.

The POTUS has binders full of magazine clips.

Pres. Obama's press conference – critical of "magazine clips". LOL. If you don't know what they are called, then don't try to legislate them

Precisely. But, rail he did anyway.

Obama accuses gun groups of fear mongering in order to to drive up sales of guns and make more money.

Pres. Obama on high gun sales: "Those who oppose any common sense gun measures have a pretty effective way of ginning up fear of gun owners"

Obama on soaring gun/ammo sales since Sandy Hook: Gun supporters are "good at ginning up fear… which is good for business."

They must be like those nefarious doctors (also known as tonsil reapers) who scare you into letting them take your tonsils out all willy-nilly like, just to cash in.

Good grief, this man knows nothing. And just makes stuff up.

He was unintentionally correct in a way. His fear-mongering, and the fear-mongering of grave-dancing ghouls, has helped to increase NRA membership. Kudos!

As for “magazine clips,” Twitter users helpfully provide a Teachable Moment ™. He can’t ask David Gregory; he is trying to keep magazines on the down-low now after waving one about on air.

FYI, left RT @lcbchefperry: @DLoesch This is a clip and this is a magazine. They are two distinct and different items. http://t.co/W1TVp2KS

Obama touts limits on "magazine clips." Can we get a Secret Service guy to proofread this stuff first? http://t.co/jFeUWi9r #tcot @NRA

For the last time…the difference between a magazine and a clip. Please get it right people. It matters. pic.twitter.com/JUhKBddh 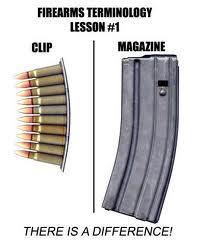 Never change, Twitter. And keep doing the job that the media won’t do.

‘I just joined the NRA’: Musket Morgan and other gun-grabbers inspire new memberships