New York Gov. Andrew Cuomo held a press conference tonight to brief the media on gun control proposals he has negotiated with the state’s legislature.

.@NYGovCuomo is giving a briefing about his gun legislation. YNN & @CapitalTonight will have details in the 9p hour.

. @NYGovCuomo says on ny safe act "common sense on this issue has eluded us for years."

YNN Syracuse’s Caryn Littler was on hand to live-tweet the announcement.

'This is one the of the greatest problems facing the state…if enacted..most comprehensive response to this crisis.' @NYGovCuomo

'This is a complex, controversial area…to come up with a multi-faceted legislation was not easy.' @NYGovCuomo

'Time is of the essence.' @NYGovCuomo #guncontrol

It is setting up an entire infrastructure that has never been done before (re:mental health) #guncontrol @NYGovCuomo

'We're not looking to demonize gun owners…people enjoy guns, enjoy hunting. Not what this is about.

The centerpiece of the measure would update the state’s assault weapons ban of 1994 and limit high-capacity magazines from 10 bullets to seven. Having eight or more bullets in a magazine would result in a $200 fine and a misdemeanor charge. The assault weapons ban would apply to semiautomatic weapons with a detachable magazine.

Private sales would be subject to a background check, with dealers serving as the middle-man and would be able to charge a small fee. Private sales over the internet would also end, according to the draft legislation.

Not everyone listening to the announcement of Cuomo’s “common sense approach” to gun control was impressed by what they heard.

I just heard NY Governor Andrew Cuomo say that you have a right to "hang a gun on your wall." Are you SERIOUS?!?

"You have a right to have a gun, Mike, if you want to hang it on your wall." – Cuomo. Was that an answer on 2nd Amendment?

I can't listen to @NYGovCuomo tell us that he's a gun owner anymore. He might as well be a racist and saying, "Hey, I have black friends".

I sincerely hope gungrabber @NYGovCuomo doesn't have any idea that he has a future in nat'l politics. #NYCOT #TCOT #CCOT #TGDN #LNYHBT

New York State Sen. Greg Ball has been one of the most vocal opponents of the Journal News’ plan to publish the names of gun permit holders.

#New York #Andrew Cuomo is a hysterical ninnie with a sense of political entitlement–playing for 2016 race.

@NYGovCuomo Sorry to disturb your feed like this Gov, but your anti-firearm rhetoric is leaving me feeling a tad subjugated these days.

In a nod to the recent outing of gun permit holders by the Journal News, the legislation reportedly includes a provision which would allow gun permit license holders to petition to have their names withheld from public disclosure if they feel the exposure would pose a danger to their safety.

Cuomo said the state Senate is expected to vote on the legislation tonight.

Behold…the bill we have all been waiting for pic.twitter.com/upJsGDej 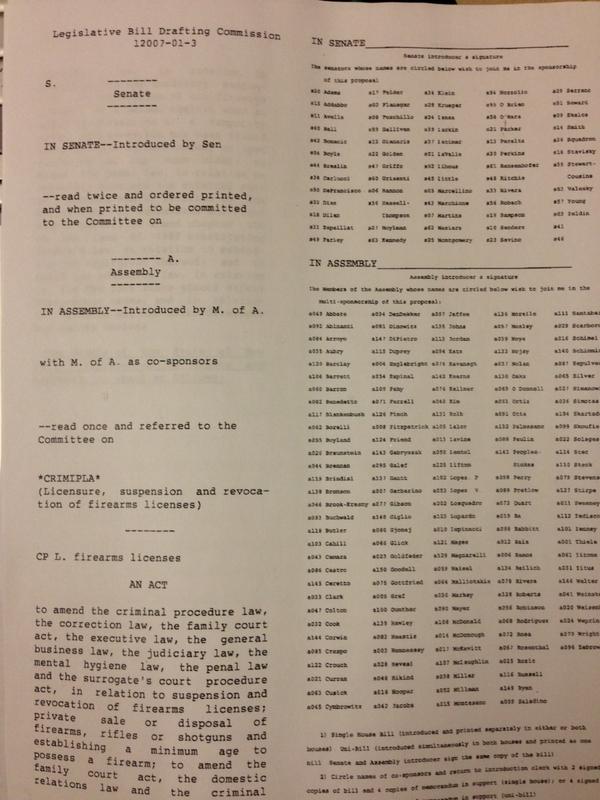 looking at a copy of the gun control bill right now It is 78 pages in length. being told it is a draft bill.

The full text of the bill is available online.

Update: That was fast.

Sen Klein of Indep Dem Conf says "of course" the gun bill will pass tonight. calls it 'a comprehensive … approach that will save lives'

Senate Rules committee moves gun bill to the Senate floor. As senators say, a bill doesn't leave Rules unless it will pass on the floor.

Gun bill now heads to the NY State Assembly, which is expected to pass the bill tomorrow.

Something that wasn't factored in to this new gun control bill: time to consider the consequences. Even Sen. Marchione mentioned the rush.

NY State Assembly adjourning for the night pushes the vote/passage of the gun bill to tomorrow.