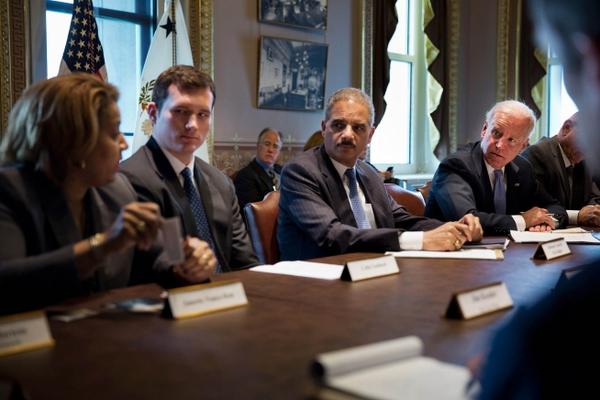 As Twitchy reported, Biden’s gun task force had a meeting yesterday. That meeting, and the executive order remarks made therein, sparked the controversial Drudge headline and photo that had the Left all up in arms (ironically).

At photo op, Biden said of gun violence: "we are not going to get caught up in the notion unless we can do everything we do nothing,"

Not covered under everything? The meeting with noted gun experts in Hollywood. As Twitchy reported, in a stunning display of hypocrisy, a meeting is scheduled with Hollywood celebs.

VP Biden also has a session tomorrow with the entertainment industry to discuss gun violence in movies and TV. No photo op either.

Shh. Don’t look behind the curtain.

There will also be no photo op during the meeting with actual gun owners. What do they know, right, Biden? Stupid bitter clingers!

VP Biden has 2 more gun violence meetings tomorrow: one with sports shooters, another with gun owners incl NRA. Photo op only at first one.

We get a Biden photo op of his meeting with sportsmen/hunters/wildlife groups – but not the sessionsi with gun owners or Hollywood.

But look who was included in the photo op?

Look who Biden has looking into gun control – Eric Holder! What????? He still hasn't faced consequences for… http://t.co/BvpwMJTW

Today Biden threatened that Obama will sign an executive order on gun control. To top it off, Eric Holder sat next to him at the meeting.

Unreal. In yet another hilarious twist, Joe Biden said this is not a photo op … at the photo op.

Biden at meeting on gun violence: "This is not an exercise in photo opportunities"

"This is not an exercise in photo opportunities." Sometimes, Joe Biden, you are quite well-spoken.

If by well-spoken, one means inane ramblings.

VP Biden on guns: "The president and I are determined to take action. This is not an exercise in photo opportunities." http://t.co/XUTWk3A9

Go go go Mr. Vice President Joe #Biden with your work on #gunlegislation. 'This is not a photo op.' #CNN

Not a photo op.

Obama has no public events, but WH has set up photo-op for Biden task force meeting.

Poor form is standard operating procedure for the Obama administration.