ŌĆ£Legal documents are easy to misinterpret,ŌĆØ reads a statement rushed out by popular photo-sharing service Instagram this afternoon in an attempt to stem what looks like a huge exodus of users. An update to its terms of service led many to believe that Instagram, which was purchased by Facebook earlier this year, was planning to sell usersŌĆÖ photos to advertisers without their consent, prompting many, including celebrities and media personalities, to threaten to delete their accounts.

Sorry everyone but my Instagram is now on private until I can delete. I will also delete Facebook.

Sorry I gotta delete you, Instagram. I liked your filters."Instagram Says It Now Has the Right to Sell Your Photos"http://t.co/Gub9fDZk

#Instagram can now sell my photos & use them in advertising ads or anyway they want without my approval other then using me their app? LAME

Instagram, you were my favorite app and you stabbed me in the back. I feel like I married you and you just slept with my best friend.

Bye Bye Instagram. It was funŌĆ”. but I don't need you owning my pics & selling them without permission. http://t.co/tZ5qPnut

Less than a month to enjoy @instagram before we all have to bail! Everyone get pictures of your meals and views from hotels in STAT!!

#Instagram will now be able to use anyone's photos in ads? Without consent? Come on! Is there another photo app people recommend? 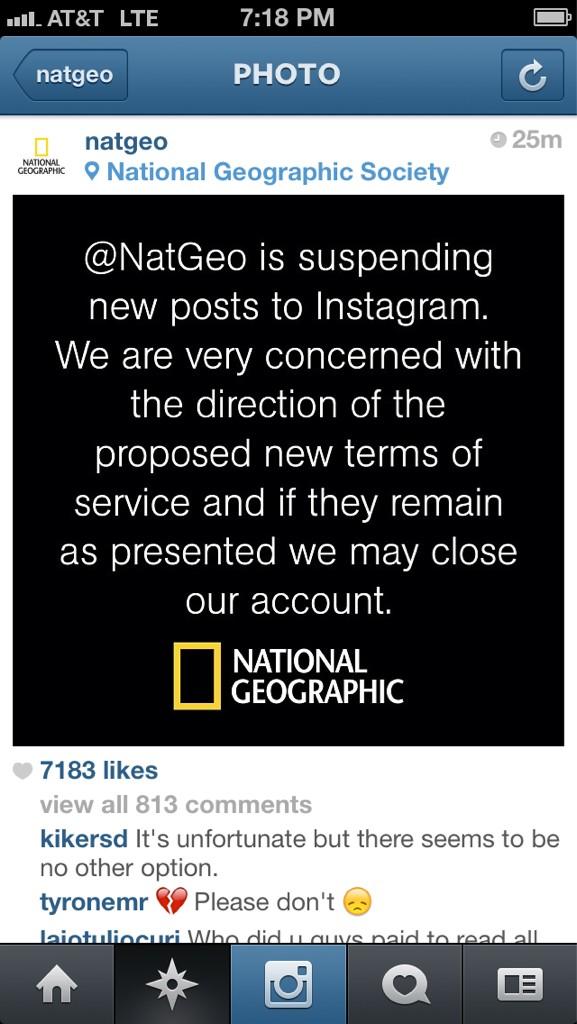 HereŌĆÖs the language that had everyone upset:

That was the word yesterday, anyway. Instagram insists in its statement today that it has no intention of selling anyoneŌĆÖs photos, and content uploaded by users remains their property. In the meantime, as Instagram revises its terms of service, it has offered the following scenario to calm users.

LetŌĆÖs say a business wanted to promote their account to gain more followers and Instagram was able to feature them in some way. In order to help make a more relevant and useful promotion, it would be helpful to see which of the people you follow also follow this business. In this way, some of the data you produce ŌĆö like the actions you take (eg, following the account) and your profile photo ŌĆö might show up if you are following this business.

Will that be enough to draw users back? A campaign to #BoycottInstagram was already in full swing earlier in the day, and many had already deleted their photos, following instructions posted by tech blogs and other media outlets. Just because people post photos of every cup of cappuccino they drink doesnŌĆÖt mean they donŌĆÖt take their privacy very seriously.

Today is national #BoycottInstagram day. Instagram is going to start selling your private photos on January 16.

deleted all 18 of my pictures, closed @instagram profile and deleted the app. IŌĆÖm sure that was the final straw for them. #boycottinstagram

My personal instagram has photos from my actual photography. From my pro camera. Copyrighted images that they'll now sell? #BoycottInstagram

With an apology extended and the picture a little clearer, will users be lured back? Twitchy will monitor the situation to see what develops.