While many members of our oh-so-esteemed media were ghoulishly weaving the Sandy Hook Elementary School massacre into their beloved gun-grabbing narrative, others were more concerned with getting a scoop … out of the mouths of babes.

Before the blood of 20 murdered children was dry, reporters descended on Newtown, Conn., to pry terrified reactions from traumatized schoolchildren.

Just look at the concern on Katie Couric’s face as she interviews those kids. What compassion!

Sensitive “real journalist” Piers “Musket” Morgan got in on the action too, bringing a child on his CNN program after spending the day politicizing the tragedy on Twitter.

is @piersmorgan serious? youre interviewing a kid who was traumatized today/lost her schoolmates. shame on you @cnn. #PrayForNewtown

In answer to your tweets, no, Of course i will not be interviewing children from the school. I do not think that is appropriate at this time

But dozens of other journalists sought out fragile child witnesses and frightened classmates with no regard for their state of shock or the further damage that might be done.

That pathetic CYA policy didn’t fly with viewers, and Cooper’s fellow CNN reporters were among the most criticized offenders.

Really CNN? She's in 3rd grade. "Was everybody crying, scared, wanting their parents to come get them?" http://t.co/wRjGbtmk

I love how CNN has an opinion piece about not interviewing kids after a tragedy, along with 2 kid interviews. http://t.co/fz4TugU3

@CarrieKvas It's disgusting. I saw one clip on CNN of a journo (as the parent is being interviewed) blatantly pulling over kid for interview

CNN wasn’t the only network seeking out children for interviews.

These kids just witnessed mass murder, why is CNN, Fox, MSNBC reporters the first people they are talking to, and not a child psychologist?!

Dear NBC, CNN, FOX, and MSNBC, stop interviewing children. Its unethical and can be damaging to them later. Its not necessary.

And local reporters joined their national brethren in their attempts to be first at pulling tearful quotes from horrified children.

@LizaPersky You would have been sick at 12:30 a Ch2 Reporter was hammering a kid with questions, mom was w/him but I think she was just numb

@PaulSurreal the local reporter who basically said 'I don't believe you' to that kid should be f*cking ashamed of himself. Disgusting.

One journalist even suggested it was all for the greater gun-control good.

It's awful to see traumatised kids interviewed. But just maybe, it's emotive & shocking enough to spark some real change in DC #SandyHook

People of all political stripes, including some members of the media, were appalled by the quest to add to these kid’s emotional trauma in the name of “journalism.”

As a parent, I'd just like to make it clear that reporters interviewing kids right now are disgusting… #HaveSomeRespect

INDEED. MT @gretawire: Might be a good time for the media to rethink whether to air interviews with children… http://t.co/dthfhgEy

Any media interviewing the children involved in the CT shooting should be taken off the air.

Interviewing children whose school has been under siege. Keep up that class, media! Dirty laundry, indeed. #Newton

Dear media brethren. LEAVE THE SURVIVING KIDS ALONE…do not interview them…let them be enveloped with hugs & kisses from their families.

Some reporters had the audacity to interview Sandy Hook students right after their classmates got shot. How would they think that was ok?

Here's a novel idea for media covering Conn. tragedy. LEAVE THE KIDS ALONE. QUIT INTERVIEWING THEM. THEY'RE KIDS, FOR CRYING OUT LOUD!!!

Dear national media: it is universally NOT okay to interview little children after 14 of their schoolmates have been shot. #Newton

There is a 9 year old on TV right now, and she's talking about the guns she saw. Have you any moral judgement left, television news? #Newton

There is no way a reporter can ask a child a question that is developmentally appropriate and safe in that situation. You are doing damage.

Today I saw the same media that preaches at me from a moral highground interview children at th scene of a schol shooting. No, really.

Take a bow, “real journalists.” You’ve outdone yourselves this time.

While survivors of the massacre are hopefully home with their families today, the vultures are still circling at Sandy Hook Elementary:

"NO MEDIA BEYOND THIS POINT" RT @thomaskaplan: Reporters are pouncing on any non-reporter who ventures near Sandy Hook. pic.twitter.com/s7amrofE 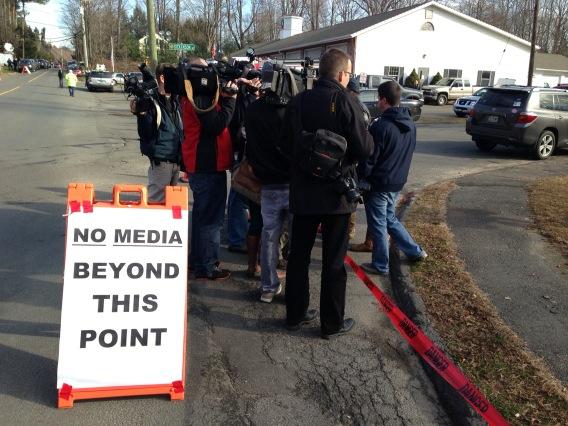