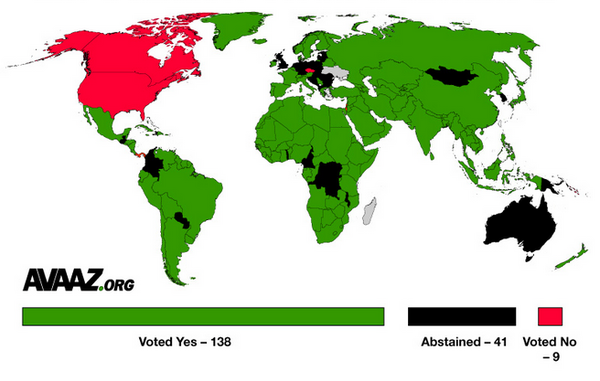 Yep, that sea of green and black was Rice’s followup to her role in misleading Americans on the nature of the terrorist attack on the U.S. consulate in Benghazi. Only eight nations joined the United States in voting “no” on granting Palestine nonmember observer status at the United Nations. Only eight. And instead of being fired, she may be up for a promotion to Secretary of State.

Heck of a job on that Palestine state vote in the UN, Susan Rice. That IS your responsibility, n'est pas?

Richard Grenell, a former U.S. spokesman at the UN, blasted Rice for her miserable failure.

SusanRice convinced 8 other countries to join the U.S. in rejecting the Palestinian bid for UN membership. why isn't she being fired?

after today's failure at the UN, anyone who advocates for Susan Rice as Secretary of State has as much credibility as Baghdad Bob.

During Bush Admin: Israel elected as VicePresident of the 60th UN. Obama Admin? Palestine (with Hamas coalition) elected a member.

today's UN vote shows that Susan Rice shouldn't be promoted, she should be fired.

Grenell: 30 reasons why Susan Rice shouldn't get a promotion (and not 1 has to do with Benghazi) http://t.co/qVnUSQso

Check out all 30 of Grenell’s reasons Rice has no business serving as our country’s top diplomat.