‘READ THE ROOM!’ DNC will mark Biden’s first year tonight with a WH light display to…

‘Testy!’ Biden berates reporter for quoting what he said about opponents of ‘voting…

President Biden seems to be undermining the legitimacy of the upcoming election, which is a threat to…

Who wants to tell him? Biden blames Republicans for blocking his agenda

‘Sheer lunacy’: Biden says his first year has ‘outperformed what anybody thought would…

CNN: Focus groups are saying President Joe Biden is coming across as ‘old and absent’

Surreal … and decidedly unappealing. But, uh, feel free to click the images if you want a gander at the uncensored versions. Warning: nude protesters are never easy on the eyes.

If you insist on naked protesting, at least be hot… http://t.co/TALkhqMF

@AnnieLowrey @sahilkapur That could result in the greatest headline in history.

the office boehner doesn't use. RT @ElaheIzadi: Nude protesters are in Longworth, not Boehner's Capitol office.

The seven naked AIDS activists are staging a PR stunt protesting budget cuts at an office the Speaker of the House doesn’t use.

And is it a staged non-Boehner naked protest? You betcha.

I find it amazing that a dozen or more journalist just happened to be in Boehner's office at the time of the nude protest.

One protester insists the government is stripping people naked.

"the truth is, that people with aids have been stripped naked by the gov't" – Jennifer Flynn @jenniferflynn @HealthGAP

Sorry, doll. That breeze you feel? You built that.

More brilliant thoughts from the streakers in Boenher’s office:

Expect Twitter’s punsters to be out in force on this one, providing one another stiff competition for the cheekiest comment of the day.

Video at the link … if you’re so inclined: 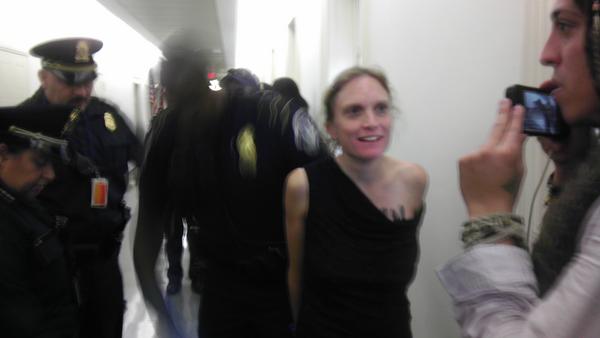 For once, I wish there had been a govt cover-up. RT @TwitchyTeam: Nude activists protest in Boehner's office http://t.co/qPQ4tBGx

Yep. RT @amandacarpenter: Who is having the worst day in Washington? The poor staff assistants greeting guests in Speaker Boehner's office.

If I am ever going to protest naked it will be for something cool. Like bacon or whiskey.

There are actually people who woke up today and said " today, I'm going to get buck naked in front of John boehner's staff."

He would blush but, you know. RT @BreeTheWanted: There are naked protestors outside John Boehner's office…. #tcot #p2

No I will not click the 'nudists storm Boehner's office'. WTF is wrong with the unhinged left? Keep your damn pants on. Criminy.

That's a win. RT @bdomenech How about we require all lobbyists to do so naked? It's refined prostitution anyway.

Depends on what meaning of "naked" is. RT @baseballcrank Naked budget protests is just a transparent gambit to get Bill Clinton back to DC.

Oh, my. A Twitter user offers a much-needed palate cleanser for the ladies:

This one’s a winner:

Andrew Feinberg says Biden’s just too articulate for us, who have short attention spans and respond best to memes