Riots  continue in Egypt this morning, and they have spread to the U.S. embassy in Cairo. As Twitchy reported, protests started against the Muslim Brotherhood and President Morsi after he granted himself dictatorial powers.

So the Arab spring/shit fountain continues with riots in Egypt. Now the leader of the Muslim brotherhood has basically declared dictatorship

Muslim Brotherhood urged its supporters to also take to the streets.

Egypt: Muslim Brotherhood calls for mass demo in Cairo to support Morsi: After demonstrators took to the streets… http://t.co/dmrz9rwf

And so it begins.

News abt resignation of President Morsi's consultant. Clashes between protesters and security forces next to the US embassy in #Cairo #Egypt

Police have pulled back to the side of the US Embassy. Rocks being thrown on both sides of the barbed wire. #Cairo

Limited rock throwing and tear gas w/ riot police at US embassy's north gate. Guards a bit tense because some rocks have landed inside walls

The U.S. Embassy in Cairo appears to have been given the keys to its Twitter account back after being given a long time-out, and weighs in.

For safety reasons, the rest of today's visa appointments will be rescheduled for a later date. Vodafone will contact applicants directly.

.@Sandmonkey We believe that the Egyptian revolution was an incredibly positive step forward and we want to see its aspirations fulfilled

Oh, really? This is positive?

More reports from on the ground.

RT @RenaNetjes: Radio Egypt: Clashes between security forces and demonstrators near the US embassy. #Cairo #Tahrir

Looking toward US embassy fighting from Qasr al Nil bridge, smoke rising from s.t. in the street. pic.twitter.com/rPMHQtaH

At front police not engaging from Qasr AlAini. Protesters attacking Egyptian police at back of USEmbassyCairo 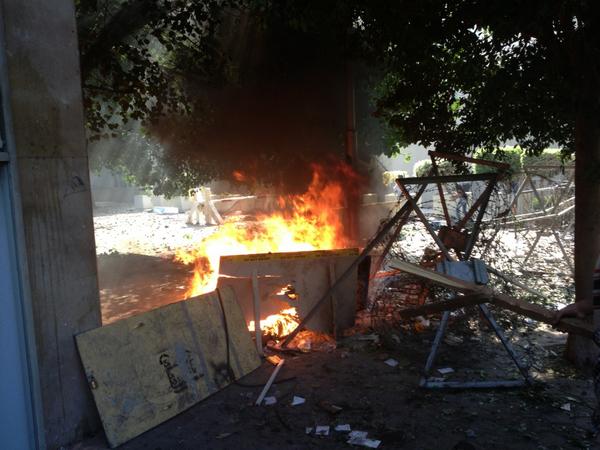 Protesters through other side of barricade along USEmbassyCairo wall. Stacking guess station. pic.twitter.com/T7HjMtSG 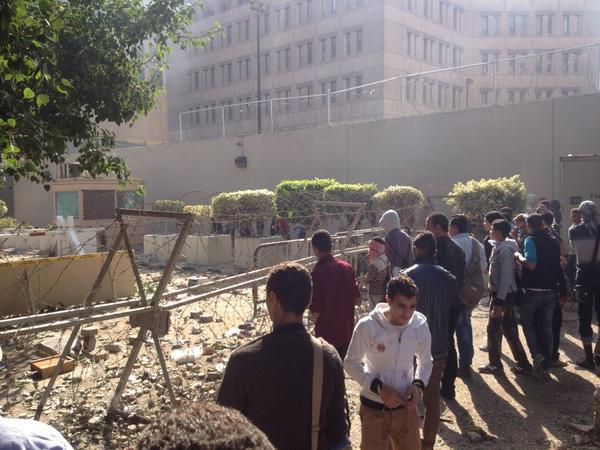 Large crowd of protesters confronting photographer about his pictures. I am moving back from front.

Pulled back from front for a while.

The embassy continues to tweet, first denying that the Obama administration threw them under the bus for the embassy’s disgraceful apology tweet on September 11. Worse, they appear to stand by the craven apologism.

@dioscorusboles Criticism does not equal an apology.

@dioscorusboles Please see our other tweets on the matter for the answers to your questions. Thanks for talking with us.

@jethrosteve Because many people were misinterpreting them.

@dioscorusboles We never apologized. Why would we? USG had nothing to do with the movie. What did we do? We criticized it.

Ah, the old faux-apology for an apology. You see, y’all just “misunderstood.” Like with President Obama, dumb, old “bitter clingers” just don’t get the nuance-y nuance of craven apologitis! That’s totally the only reason they deleted those tweets.

.@cnncny Yes, we are ok. Thank you for checking. We really appreciate it.

@auscma Sure, we communicate directly with all of Egypt's major civil society and political groups. We believe in #dialogue

Dialogue! By dialogue they, of course, mean appeasement.

@lcellini We believe it is important to come out very strongly and clearly against dangerous misinformation like this.

@lcellini We correct misinformation about the US. We agree that it is up to Egyptians to determine best path forward for Egypt.

.@complit01 @SciencePyramid We do not support any single political group, but seek a relationship with all parts of Egyptian society

@gharebon Yes we are saying that because it is the truth and we are surprised that anyone could think otherwise.

@sudixitca That is incorrect. The U.S. supported the Egyptian people's aspirations to choose their own leaders. We did not interfere at all

And some advice for the embassy.

@USEmbassyCairo that looks good on paper but i think you need to revise this a bit. Not so sure the MB are willing to 'talk' with others.

Advice to @USEmbassyCairo from an American. Stop talking until DC figures out its policy.

@USEmbassyCairo @Sandmonkey You should reserve such Tweet, until the MB is finished with our new radical constitution. Sharia law is coming

Twitchy will continue to monitor this situation and update with further developments.