You gonna be ok?! The Constitution being read on the House floor triggers TF out of Aaron Rupar and LOL

Twitter freezes out GOP Sen. Steve Daines for BS reason and clearly Elon Musk still has work to do

BOOM: Elon Musk holds a BRUTAL mirror up to UN threatening openly to police the Internet

As Twitchy reported, President Obama is finally gracing the press with his presence today. It’s been far too long; Unrequited love hurts!

Obama presser will be like Paula Broadwell panting after Gen Patreus at a staff meeting.

President Obama was way too “exhausted” from campaigning to hold the traditional post-election presser. Priorities!

The last time Obama had a presser he said "the private sector is doing fine." Can't wait for what he'll say this time

Pres. Obama sure to face questions about the handling of the attack in Benghazi that killed 4 Americans including his Amb Chris Stevens.

Are you sure about that Mr. Knoller? Or will the presser be filled with typical softball questions?

How are planning to blame Bush for the looming hyper inflation crisis? #ObamaPresserQuestions

Can you tell us just how mean those Republicans are? #ObamaPresserQuestions

Will you autograph my ballot?? *swoon* #ObamaPresserQuestions

There may not be time for all those, though.

Ready for Obama presser. Word is he will take only 8 questions.

I think the first question at the Obama presser will go to Pimp with the Limp.

Heh. Can we spot him in the crowd? 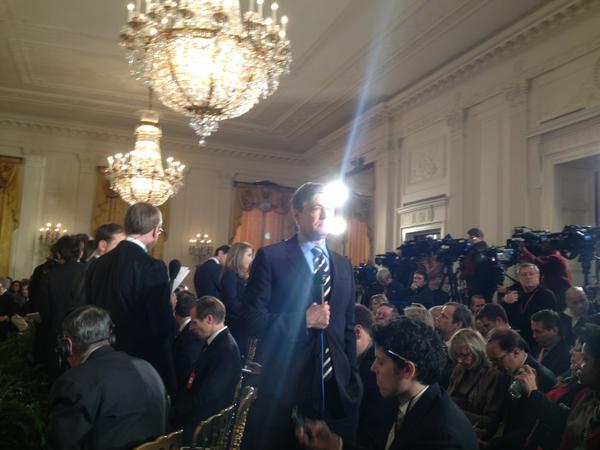 Let’s start with this question:

If you wanted to balance the budget, why didn't you do it in your first 4 years? Like you promised. #ObamaPresser

Popcorn time! Nothing beats following an Obama presser by reading tweets. Of course they're rare enough that the novelty hasn't worn off.

He's calling reporters from a preprinted list of approved reporters. Bet FOX is not on that list. Obama Presser

And, drink! Here comes the “middle class being held hostage” by those mean, old Rethuglicans. Post-partisan!

Come on, everyone had to tweet that. It’s classic drinking game fodder.

Reporter to Obama: How do we know you are not going to cave on Bush tax cuts again?

Great question for Obama at presser: "Why should the American people believe you won't cave again (on Bush tax cuts)?"

Rut-roh. Who asked that? They may not be invited back.

POTUS: We cannot afford to extend Bush tax cuts "for the wealthy" – but we can make sure middle class taxes don't go up

“Ask Herb in Human Resources. Or something.”

Finally, he admits that he knows nothing. No, really. He said it.

Obama: I know nothing.

Since #obama knew nothing about anything having to do with our natl security, who is leading our country as commander-in-chief?

He evidently still knows how to pander, though. Pander like the wind.

Next question from Telemundo. Immigration question.

Obama giving maybe the most pandering response of all time on question about whether he'll send immigration reform bill to Congress.

On immigration reform Obama says he's very confident Washington can get it done after big Latino turnout at pools: "we need to seize moment"

For his aggravating pronunciations, he must pay.

Obama can't keep his answers straight. How do you believe anything he says? Because math is hard and being a sheep is easy. #ObamaPresser

Oh, dear. So is compromise.

Greatest Orator Ever: Compromise is hard.

For those playing at home, President Obama is currently averaging 47 UPMs, or "Uhhhs Per Minute". #ObamaPresser

Translation: "Working together" means giving up everything you want and submitting to what the Dems want #ObamaPresser

#Obama Presser: Is this really happening?? What a bunch of weak-kneed, cowardly alleged journalists. Nothing but softball BS. Wow.

Oh, my! A Benghazi question actually enters the pathetic mix.

6th Question up about Susan Rice and Benghazi. #obamapresser

Obama puts out a full throated defense on Susan Rice and her comments on Benghazi. Calls attacks on her "outrageous". #obamapresser

Obama scolds Sens. McCain, Graham, saying if they "want to go after somebody, they should go after me," not Rice.

“@HuffPostPol: Obama: "When they go after the UN ambassador, because they think she's an easy target, then they've got a problem with me"”

Big, strong man will protect the poor dear! Is he finally admitting the buck stops with him? Doubtful. He’s just trying to get people to shut up about the buck.

If Pres Obama would rather focus be on him than Ambassador Rice, good. He should visit the Senate and testify if he is a man of his word.

Sen. Graham lets Obama know that he does hold him totally accountable.

Yes. We girls need to have men defend our honor @ClaraJeffery: defending Susan Rice's honor is going to play well with women. Watch out GOP

As does Kirsten Powers:

Why does Obama think GOP sees rice as "easy target"? Is she some helpless damsel in distress? His defense was a little paternalistic

Ed Henry gets 7th q — asks Obama whether he issued any orders on Sept 11 to protect lives of Americans that were killed in Benghazi.

Obama is not pleased. How dare he ask a pertinent and probing question about something important?

Obama not happy with that Ed Henry Benghazi question. . .

Now he admits that America deserves far better than HIM.

Obama: People "deserve a better government than they've been getting."

4 Americans dead in Benghazi and we get a question about climate change.

Obama is a science denier?!!!111eleventy

"The temperature around the globe is increasing, faster than it was predicted even 10 years ago," says Obama.

One reporter just treated Obama as if she was a Beatles fan girl and he was Paul McCartney at Shea Stadium in 1965. WTF, media…wtf?

If you're still wondering why Obama won reelection, the media questions so far should help you figure that out.

First press conference in 8 months and I learned absolutely nothing new. Especially on Benghazi.

These Obama lapdogs put the sick in sycophant.

And now it's time for all MSM reporters to go to their mikes and thump their chests and say what a great leader Obama is. #ObamaPresser

Jimmy Olson from the Daily Planet would have the balls to ask better questions. #ObamaPresser

#ObamaPresser "Mr President, a follow-up. Can I get your autograph on my 8×10 glossy?" #IrreleventQuestion

know why that was called the #ObamaPresser? because the media were invited to press their lips….

Can they even function without having drool buckets at the ready?

Must now write "I will not shout out questions at the president" 100 times on the chalkboard.

Pres Obama declines to answer shouted question on kicking fiscal cliff down the road. Says it be a "horrible precedent" and walks off.

And, in a nutshell:

Shorter Obama press conference: I don't know what my gov't is doing; I just know you need to pay more for it.

When answers are so long. That you've forgotten what the question was, you know the answer is mostly deflection and lies. #ObamaPresser

You voted for incompetence, America. You got it!

Twitter freezes out GOP Sen. Steve Daines for BS reason and clearly Elon Musk still has work to do

You gonna be ok?! The Constitution being read on the House floor triggers TF out of Aaron Rupar and LOL