Oh, dear. David Axelrod just gets creepier and creepier. And even more of a self-parody! This morning, he went on “Morning Joe” and wagered his creep-stache.  He claims he’ll shave it if Obama loses Minnesota, Michigan or Pennsylvania. MSNBC’s Scarborough said he’ll grow one if Obama wins Florida or North Carolina.

"Axelrod will shave his ‘stache if Obama loses MN, MI, or PA. Joe Scarborough will grow on if Obama wins FL or NC. #gentlemanswager"

See, he has “cold, hard data” or something. Twitter, on the other hand, has mockery. Mock! Mock like the wind!

Ok then RT @samsteinhp: Axelrod says he will shave off his mustache of 40 years if they lose Minny, Mich or Penn

He should have shaved it 40 yrs ago MT @gabrielsherman: Axelrod tells @JoeNBC he will come on air and shave off his mustache of "40 years"

Office pool: How many buffalo wing bones will fall on the Morning Joe set as Axelrod shaves his lipwarmer?

Why not shave off the stache now, Axelrod? Really, what is your upper lip hiding? #transparency

That's voter intimidation! LOL “@samsteinhp: Axelrod says he will shave off his mustache of 40 years if they lose Minny, Mich or Penn”

If Obama loses MI or OH, we might find Hoffa. Axelrod will be shaving his mustache. VOTE Romney.

Notice he didnt say anything about OH, NH or WI RT @gabrielsherman Axelrod tells @JoeNBC he will come on air and shave off his mustache…

This is why photoshop exists. Hop to it, internet. MT @HotlineJosh: Axelrod offers to "shave off his mustache" if Obama loses MN, MI or PA.

How many seconds til some egg called "Axelrod's Mustache"? #MoJo

And while they were prattling on and wagering creepy mustaches, guess what wasn’t discussed?

No questions @morningmika , Joe for Axelrod re: #benghazi. I'm not surprised

And, here is the first Photoshop, offered by none other than “Morning Joe” himself.

RT @Morning_Joe: Will Axelrod have to shave his 'stache? Will @joenbc be forced to grow one? Election Day will tell us. pic.twitter.com/v95b5pM0 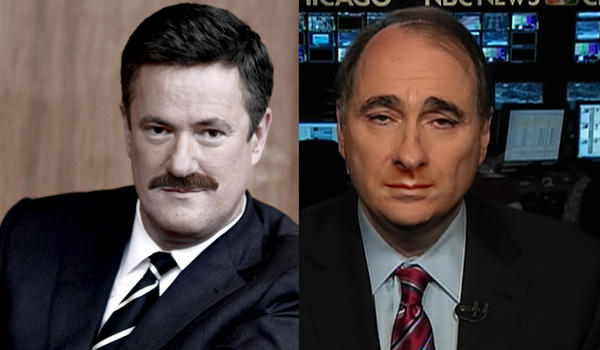 Make it happen. And keep the hilarious mockery coming, Twitter! Thanks for the giggles, Axelrod. You are good for something!

Axelrod totally snubs Virginia and won’t put the creep-stache on the line there. It’s too “valuable.”

Axelrod describes moustache as "my most valuable asset", sensibly declines to put in on the line re Virginia

He also claims they may not need to win independents. Probably because others can just vote twice.

That's what frauds are for. MT @daveweigel Axelrod on independents in swing states: "We may not have to win these voters."