So BHO found the situation room yesterday. I know because he sent out pictures.

Yes, see? They have pictures and everything.

Photo: President Obama receives an update on the ongoing response to Hurricane #Sandy in the Situation Room: pic.twitter.com/JEYyEwSJ 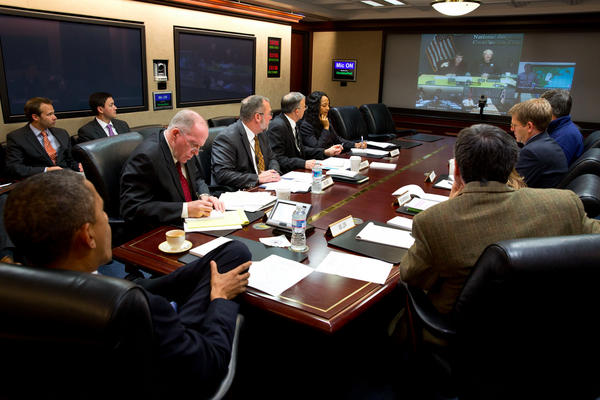 You guys, he’s super serious! And stuff. Yet, still all Man of the People-y, what with his casually crossed leg and all.

Oh, so NOW the president is in the situation room? But he went to bed during #Benghazi Awesome.

How DEAF is the WH? They release photo of Obama in Situation Room monitoring storm? Where is pic of him in that room, monitoring BENGHAZI?

Amazing how we have dozens and dozens of photos of Obama in his situation room directing #Sandy but none of #Benghazi.

This picture is going to be made famous for sure. President Obama in the situation room after Hurricane Sandy. pic.twitter.com/l5CDaQcT

Famous, but not in the good way. Maybe she misspelled infamous.

And the White House breathlessly pushes out another Sandy briefing in the Situation Room today.

Citizens continue to wonder about the Benghazi Situation Room.

@markknoller can you request a picture of the Benghazi situation room for us? Thanks #leanforward

Well, we all know where Obama was after Benghazi: Vegas, baby! And, what happens in Vegas, stays in Vegas. No pics will be forthcoming.