Twitchy told you late tonight that  FDNY personnel were battling fires across the borough of Queens, NY. The Breezy Point fire is now a six-alarm fire. Some 60 homes have now been reportedly destroyed. At 4am this morning, scanner traffic indicated that a team was finally able to shut down gas lines in the area — which lies in the flooded Zone A.

A reported 170 firefighters are on the scene.

A still from the terrible video of a massive fire out of Breezy Point. Fire fighters are still battling it. pic.twitter.com/QN6pcflL 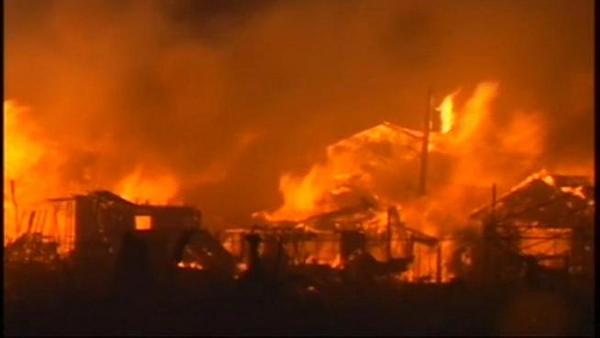 #FDNY trucks running out of fuel, calling for tanker. (Breezy Point is at the very far tip of the city, 28 miles away by street from Manh)

Bad news from Breezy Point, FDNY reporting Well over 60 houses burnt to the ground and still more on fire. The… http://t.co/wOuw4t6i

Fuel truck called to the scene of #Queens fire as #NYFD trucks are running out of fuel. #NYCwx #Sandy

Daytime photos of the damage are horrific.

Jesus. This is what Breezy Point looks like this morning. (Credit: Frank Franklin II, AP) http://t.co/BJCtQfiW

Another photo out of Breezy Point. The damage is stupefying. (Frank Franklin II, AP) http://t.co/9svfesxo

Who else can’t wait to see media give Jill Biden the Melania treatment over the former’s bold post-hurricane fashion choices? [pics]