The FDNY Queens dispatcher directing units to fires, telling them they'll PASS other fires en route! #badass A day for the history books.

Listening to NYC police radio. No access for FDNY to a fire in Queens. Crazy stuff.

@FDNY what's the status on the 3-alarm in Breezy Point? My mom is stuck at 69 Bedford Ave, fire is not too far away…

@MaxCountryman Right now our computers say around 20 homes on fire. Still at a 3rd alarm.

heard from a friend in #rockaway — he hears #FDNY arriving to fire on B130. says its about a quarter of a block to the fire

22 Courtney lane in Rockaway point, Queens communications got a call for a house fire with occupants trapped in their attic

Queens asking for dump trucks to get firefighters across Marine Parkway bridge. 15 homes on fire in Rockaway. #sandy

#FDNY units told to respond to rockaway fire over marine highway bridge, all other are impassable

More help on the way:

Firefighters are battling a four-alarm fire in the Breezy Point section of the Rockaway peninsula in Queens. http://t.co/M7PcCn42

@NBCNewYork It's now a 5 alarm. 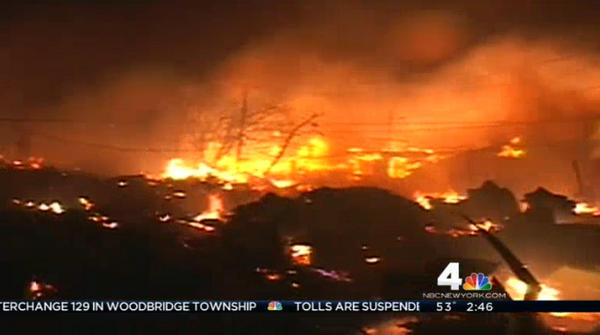 The US Army is at the Queens Breezy Point fire with 7 ton trucks escorting firemen into flood zone. #fdny hundreds of fire engines on scene

Fires break out across Brooklyn