If we were Rachel Bitecofer, we definitely wouldn’t be promoting this ad putting Dems ‘on…

AP actually does their job for once and researches John Fetterman’s record, and libs aren’t…

Calif. Gov. Newsom’s way of combatting inflation could hit some snags (not that he cares)

The sky is FALLING and Don Winslow can’t deal

Thou shalt not tell the truth: @FearTheFloof has vanished from Twitter after his thread about privileged…

‘Unbelievable’! Biden admin has a plan to increase oil production (no, not in the US —…

Mitt Romney and Paul Ryan held a rally at a packed Red Rocks Park and Amphitheatre in Morrison, Colo., tonight. It was a sight to behold: 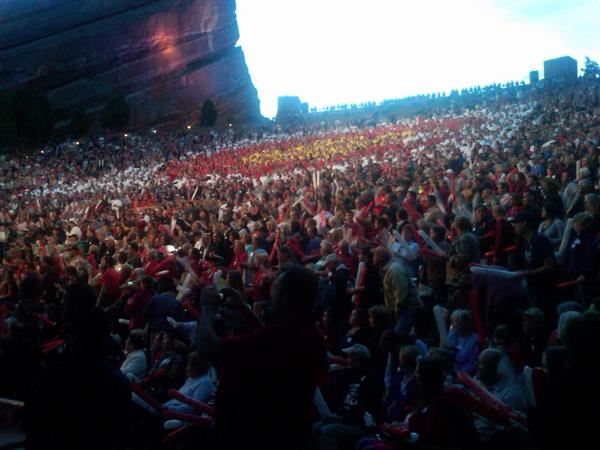 And from the top of the venue:

Red Rocks officially holds almost 9,500 people. There were just a few more ticket holders than could be accommodated:

My wife and daughter tried to go to Romney rally at Red Rocks and were turned away. Packed house sellout. Couldn't get close to event.

So sad. Waited 2 hours in line and did NOT get into Red Rocks to see our future President Romney. Thousands turned away!!!!

Enthusiasm? You could say that.

I hope all Americans see this Romney speech at Red Rocks. It is heartfelt, sincere, patriotic & determined. http://t.co/e3Tr3CdN #tcot

Crowd at Red Rocks has many more young people than typical Romney crowds. #2012

Justin Romney or Mitt Beiber? MT @PhilipRucker: Thousands of Coloradans are screaming Mitt's name at Red Rocks. Like at a Bieber concert.

Hope reporters remind their audience Romney/Ryan's Red Rocks event is occurring in a facility built by the gov't via FDR's socialist CCC.

Colorado Dems pointing out the irony of Romney event at Red Rocks, which was built entirely w/ public funds in 1930's. http://t.co/mnulJNVG

Do you think conservatives let that weak talking point slip by unchallenged? Of course not.

@GarrettNBCNews Do they also point out the irony of Romney using a highway which was built with public funds. Or how about the airport.

@GarrettNBCNews ummm… So are all the streets and town squares where Romney has had rallies.

Romney credits the power of God for the beauty of Red Rocks. Cue indignant Tweets about the WPA in 3… 2… 1…

Feel that, libs? It’s momentum — and your guy doesn’t have it. Just ask Sandra Fluke.

If we were Rachel Bitecofer, we definitely wouldn’t be promoting this ad putting Dems ‘on offense on the economy and inflation’ [video]