Nick Jr. is the younger sibling to Nickelodeon, the children’s cable network that employs foul-mouthed misogynist Jason Biggs. Nick Jr. runs programming for the pre-school crowd, like “Dora the Explorer” and “Blue’s Clues.”

But this month, the network launched a racy nighttime lineup called NickMom. At 10:00 p.m. EDT, “Blue’s Clues” gives way to comedians working blue.  The NickMom block runs until 2:00 a.m. and includes profanity and sexual content in shows like “Parental Discretion” and “NickMom Night Out.”

NickMom’s slogan is “Mother Funny” and it’s supposed to be edgy “mom comedy.” Or something. But plenty of moms aren’t amused. Here’s a taste of what’s airing on NickMom:

Another sick NickMom quote airing as early as 4:00PM on the NickJr channel. pic.twitter.com/ieOHEa1Q

Wtf is nickmom? Turned his channel trying to watch a cartoon for my niece and they talking about penises…?

@viacom my son heard vulgar language on @nickjr during the @nickmom programming. I turned tv on & before I could change channel we heard SOB

While most toddlers are in bed when NickMom airs on the East Coast, the adult programming begins three hours earlier on the West Coast.

@nickjr @nickmom do you idiots understand your Nickmom programming airs from 7 pm onwards on the West Coast?

In Hawaii, NickMom kicks off at 4 p.m.

A site called Cancel NickMom was launched to help fed up parents put the pressure on Nick Jr. and its advertisers. The site is asking Viacom, the network’s parent company, to either cancel the NickMom block or move the programming to a different channel.

A simple how to guide for all those idiots at Viacom who are unable to problem solve. http://t.co/GgsRiAzR pic.twitter.com/k2HhJp4F 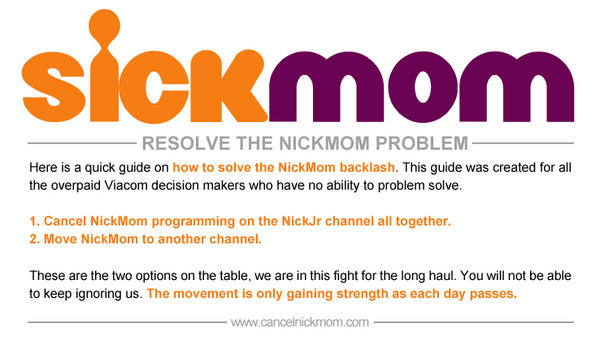 Call you cable provider and complain about NickMom. They are receiving massive amounts of calls and are planning to contact the network.

Chrysler is up tomorrow. Please go to http://t.co/GgsRiAzR as we take on another huge NickMom supporter. pic.twitter.com/0M80tq76

A network exec told AZFamily.com that Nick Jr. airs warnings about the adult shows at least 10 times per day. But that’s not enough for the parents who’ve been tweeting their disgust with the NickMom lineup.

Uh, #NickMom: there's no shortage of trash TV so stick to wholesome programming for our babes round the clock, thanks. #disgusted

Yes followers I'm angry about @nickjr putting on this "nickmom" mess on their channel at 10pm. There's enough reality tv w/out it on @nickjr

Another questionable @nickmom decision: not sending out their adult-oriented program in a separate feed for west coast. http://t.co/3zIB0MRU

But Nick Jr’s move isn’t just stirring up a handful of parents.

Someone thought a block of programming on Nick Jr called NickMom would be a good idea. Uh oh. http://t.co/8fcr2SEr

The Wall Street Journal reports that Nick Jr.’s adult-targeted nighttime programming has turned into a veritable case study on how to destroy ratings.

It might have seemed like a good idea at the time: To draw new viewers to its Nick Jr. children’s network, Viacom Inc. recently scheduled a block of racy adult programming called NickMom. But the programs have sparked an outcry and sent ratings down 74%.

It might be premature to write an obit, but Nick Jr. has definitely dug itself a grave and the free market is ready to say its goodbyes.