Is there something funny, Joe? We’ve been having fun at the vice president’s expense all week in the lead-up to tonight’s debate, but things have turned serious over the last couple of days as the State Department has broken ranks with the White House and admitted that there was no protest which led to the deaths of four Americans in Libya on Sept. 11.

Biden clearly worked very hard on the Romney smirk all week. He didnt get it quite right.

Biden, get that smirk off your face. You look like an idiot.

Biden smirk is… not good.

Biden, wipe that stupid smirk off your face

Not sure I can sit and watch this whole debate with Biden's condescending smirk on his face.

All of Biden's laughs and smiles are making him look like a village idiot.

I do think Biden is on the verge of condescending/body language here in his tone. #vpdebate

These are serious issues and Biden is just laughing them off. It's insane.

Biden's smirking teeth are beginning to strobe through my TV screen. Disturbing. #PMTdebate

Biden’s smirk has evolved into laughter, but not everyone is in on the joke. Ryan fans aren’t amused, and even some Obama supporters are unsure how Biden’s condescending approach is playing with the audience.

The YouTube video of Biden laughing continuously on loop is going to be awesome. #vpdebate 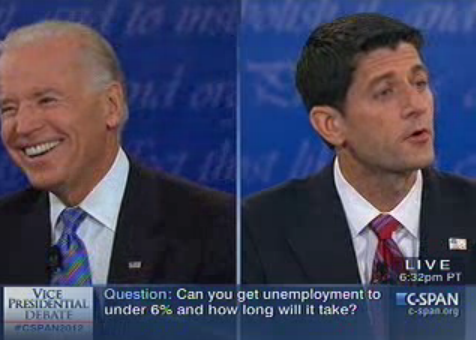 What is Biden laughing at ?

Joe, you're killin' me!!!!! @saturdaynightlive is going to have a field day!

I'm glad people think this is so funny- our country, our people are hurting.

Yanks-Os tied right now. Kind of like this debate. Hard to say anyone is winning, although Biden's laugh might lose it.

Trying to figure out if Biden's lit or he just likes to sit & laugh a lot. He prob shouldn't have had that brownie prior.?

The condescending laugh of Joe Biden just highlights this administration's arrogance when they can't argue the facts.

Joe Biden is laughing at the possibility of Israel being engulfed in a nuclear fireball. Laugh it up, idiot.

Looking like Biden's gameplan is to laugh his way through this.

Good question —> "Has Joe Biden had some laughing gas in the past few hours?" – @ElizabethTRyan #vpdebate #fb