The neatly arranged Women for Obama hosted a rally this morning in Fairfax, Virginia, where the president got down to the nitty-gritty of women’s issues: contraception. Because, as we all know, it’s all about the ladyparts, baby!

Indeed. So vital that taxpayers should be forced to foot the bill.

Pres Obama said "doctors prescribe contraception not only for family planning but as a way to reduce the risk of ovarian and other cancers."

Pres Obama said the overall cost of health care is lower "when women have access to contraceptive services."

That is soooo true. Everyone knows that without government-sponsored birth control, women will be forced to shell out $18,000 annually on contraceptives alone!

"I don’t think a working mom in Arlington (VA.) should have to wait to get a mammogram because money’s tight," the pres told his rally.

Yep. And thanks to Obamacare’s “expert panel,” that working mom will be encouraged not to wait — as long as she’s over 50. Otherwise, sucks to be her.

To his credit, Obama also touched briefly on the economy, because he really cares about how women are affected:

Obama at a VA rally says economic issues that effect women did not get enough attention at Wednesday's debate.

Maybe not from Obama. But Romney has definitely taken notice:

Unfortunately, Obama’s audience wasn’t paying attention; they were too busy being swept up in fits of ecstasy. After all, what’s sexier than being viewed as a uterus with lipstick?

All the women in the stands for President Obama!! pic.twitter.com/TATfO9np 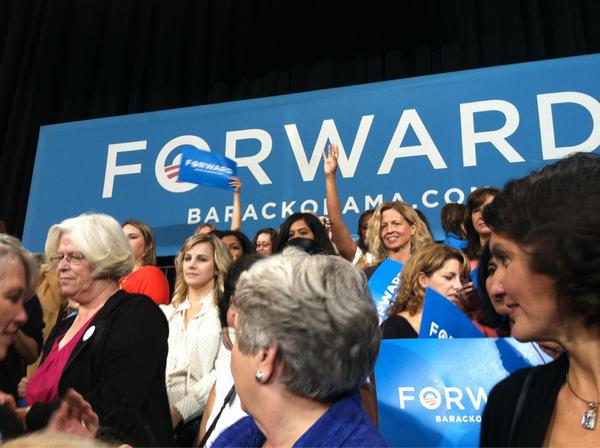 We Women Pres Obama Say Thank U for #ACA

Lots of screaming women in the Obama rally.

The women at the Obama rally are fired up! Wish I was there to shake his hand!! #WOMEN4OBAMA

Quick! Someone fetch the fainting couches!

Conservatives, sick and tired of Obama’s shamelessly shameful condescension toward women, spoke up:

@cspanwj Apparently, federal funding for killing female fetuses is Obama's idea of being on the side of women.

what a joke MT @markknoller: Obama slammed Romney for opposing contraceptive care coverage for women – "which is vital for women's health."

And taxpayers pay for it MT @markknoller: Obama said overall cost of health care lower "when women have access to contraceptive services."

Women deserve better than what President Obama is offering. It’s a shame that the Women for Obama remain so willfully blind to that:

@CNNAshleigh What do u call that group of women standing behind Obama at his rally-GULLIBLE!