Oh, my! Matt Drudge took to Twitter to tease a video release scheduled for tonight.

And not from Mother Jones.

Something bombshell-y on the eve of the first presidential debate?

What could it be? These Twitter users hazard some guesses.

I really hope this video @DRUDGE is teasing is a leaked alternative LOST ending.

Twitchy will monitor and update on developments.

@DRUDGE is teasing my #ladyparts

Siren on Drudge…."Obama's other Race Speech"

Hmm…so @FoxNews has a damning speech where the President may have spoken in a racist fashion. That doesn’t narrow it down much.

“@THEREAL_Evan: @MarkHalperin Is there a point at which those who criticize the #freakshow become complicit in its existence/continuance?”no 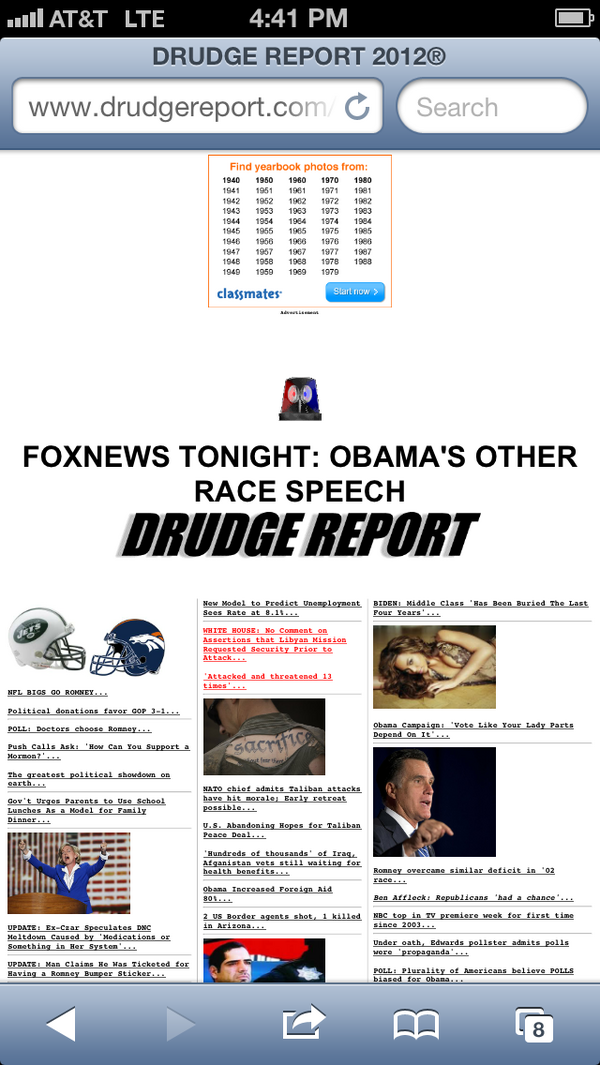 You are dismissing a story BEFORE YOU EVEN SEE IT. All you know is that it hurts Obama–and that's enough for your scorn @MarkHalperin

And your own fucking magazine published on "The White Horse Prophecy" a day ago. Did you forget? @MarkHalperin

unless… of course… @markhalperin already HAS seen it, but passed on it…

Well let me ask the question: @markhalperin, have you already seen the tape?

Twitchy will continue to monitor and update with further developments.

The video in question, not the edited YouTube version, will be on The Daily Caller at 9:00 pm Eastern.

OBAMA DECLARES HOW POOR PEOPLE: 'Need help with basic skills, how to shop, how to show up for work on time, ….cont'd

how to wear the right clothes, how to act appropriately in an office's VIdeo tonight at 9 pm ET – Fox News

Drudge continued teasing the “curious” tape with these tweets:

Nothing to see here: Progressives dismiss Drudge video tease before it airs