Being commander-in-chief is hard. The president stopped by a campaign office today to visit volunteers, and not only did he generously bring a stack of pizzas — he indulged in a little whine as well.

We know the president’s been hard at work; we have photographic evidence from the White House that he eventually broke down and called Benjamin Netanyahu from the confines of his office. Of course, that was after field trips to visit Jay-Z and Beyoncé, David Letterman and the women of “The View.”

President ObamaPhone can (almost) always be counted on to phone it in when pressed, but he couldn’t help lamenting to his volunteer supporters that “they” won’t let him out to play.

Pres Obama phones his thanks to campaign volunteer at campaign office in Henderson, NV. Pizzas on the left. pic.twitter.com/NSi0WaVG 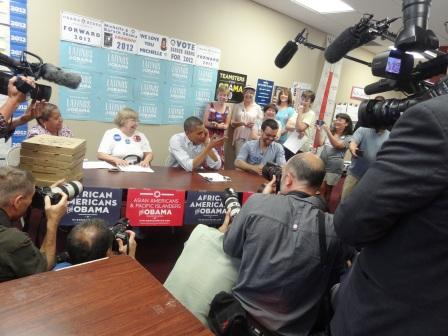 In a phone call with a campaign volunteer, Pres Obama said the debate prep is going great "but they're keeping me inside all the time."

Homework can be a drag, can’t it? Are “they” quizzing him on tough questions, like the amount of the national debt? Whether or not Egypt is an ally? How to spell “Ohio”?

.@markknoller Which means: "They're making me do my fucking job, which I applied for, was given, and am incompetent at". #ObamaDrags

@markknoller He sounds like my 12 year old son. Gosh, Mom, being leader of the free world is such a draaaag.

If only someone had made #Obama attend his intel briefings… RT @markknoller "they're making me do my homework."

@markknoller Hope he's brushing up on foreign policy in his"homework." &learning proper demeanor when an Ambassador's murdered on his watch.

If staying inside and working is such a drag, might we suggest a change of career?