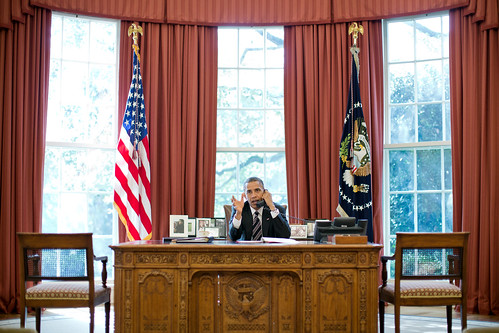 We wondered yesterday if he would phone it in via the #Obamaphone.

The White House was so anxious to show that President Obama is super focused on those pesky foreign policy thingies that the photo was sent out before even confirming the call, evidently.

Gotta get that “eye candy” out there, huh? The White House has a habit of sending out photos as “evidence” to prove President Obama is totally focused and stuff. Only, you know, not on intelligence briefings or anything. Those are icky.

@daveweigel @petesouza So nice that he scheduled the time. How convenient- even took a picture of it. Oy!

@samsteinhp @petesouza sooo?? what's your point? that means he's a great president and is a whiz on foreign policy?

RT @TheStalwart: He looks thrilled. RT @petesouza: Photo of Pres Obama talking on phone to PM Netanyahu this am: http://t.co/mztfWCnS

@petesouza while skipping his security briefing and failing to address domestic issues?

@petesouza Prolly faked it. He was really talking to his bookie.

Or perhaps booking his next flight to Vegas, baby.

And, of course, Media Matters’ Oliver Willis must mock Netanyahu. See, his address to the United Nations yesterday was incredibly powerful, so of course the Left freaked out.

"the cartoon bomb was kind of hacky, bibi" RT @petesouza: Photo of Pres Obama talking on phone to PM Netanyahu this am: http://t.co/mNh882DJ

Yep. He snubbed Netanyahu’s request to meet personally, claiming “travel conflicts.” By that, he meant that he was too busy canoodling.

Outrageous — ‘Netanyahu gets a cold shoulder from the Obama Administration’ http://t.co/UHFAdTfz

What a disgrace. And all the purty pictures in the world won’t change that.