Listen to the whole thing? That would not suit. How could the lapdogs then deceptively edit video in order to attempt to shame Mitt Romney and boost up The One? First it was Andrea Mitchell over at MSNBC. Remember, she ran a deceptively edited video trying to paint Mitt Romney as confused by Wawa. That “real journalist” was exposed by “just a blogger.”

And it has happened again.

What video? Oh, just one that Joe Scarborough ran on MSNBC’s “Morning Joe” and other media outlets breathlessly ran with it.

If you somehow haven't yet seen video of Romney stopping crowd from chanting "Ryan" and starting "Romney-Ryan" chant http://t.co/aHd2b6vm 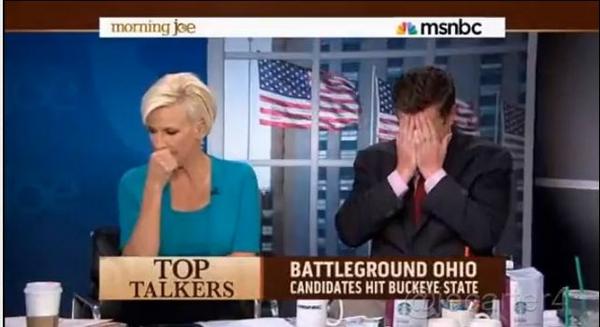 Turns out, he should be double facepalming himself.

That’s right. MSNBC ran a clip that tried to paint a false narrative. They claimed that a crowd at a rally was chanting the name Ryan. And that Mitt Romney jumped in and tried to get them to chant Romney instead. What really happened? The Blaze uncovered the deception.

Indeed, the MSNBC closed captions claims the was crowd chanting “Ryan!“ when attendees say they were actually chanting ”Romney!” Obviously, this changes a lot about the situation. Instead of awkwardly inserting his name into what sounds like a failed chant, Gov. Romney was actually including his running mate in a crowd chant of his own name.

“Mitt said, ‘Let’s try this, Romney/Ryan, Romney/Ryan, I like that better!‘ Jewett’s email continues. “I thought to myself ‘what a humble guy to include Ryan in our chant.’”

And, as we discovered, live tweets from a couple of journalists covering the rally prove it as well.

Romney gets on stage and the crowd chanting 'Romney, Romney' and so Romney starts a "Romney/Ryan, Romney/Ryan" chant.

RT @GingerGibson: Romney gets on stage and the crowd chanting 'Romney, Romney' and so Romney starts a "Romney/Ryan, Romney/Ryan" chant.

@luvGodncountry I watched this live. The crowd chanted "Romney, Romney" & he corrected them to chant "Romney-Ryan". MSNBC liars. @theblaze

@Morning_Joe @JoeNBC Romney started the chant Romney Ryan because we were only chanting for Romney..your twist is disgusting

Journalists for Obama aren’t just shamelessly cheerleading now. They are trying to fix the game. Twitter users are disgusted, and rightfully so.

@joeNBC – You laughed at the Ohio video of Romney trying to get the crowd to chant Romney-Ryan as if they were chanting Ryan. U r so sad.

@joenbc DON'T YOU EVER CHECK THINGS OUT??? What is WRONG WITH YOU??? @msnbcpr http://t.co/hAvCcKX8

@JoeNBC Hey Joe nice edit job on the Romney/Ryan video (you hack) – are you a wiling collaborator for the liberals or just a dupe?

Sweet Jesus @JoeNBC you are an embarrassment! Responding to a doctored MSNBC video that way! Mitt asked them to ADD Ryan to their chant.

@JoeNBC Ohio "Ryan" chant was dr. See same CNN video for proof. Do you have the guts to correct on air? Or does Mika have you wrapped??

@JoeNBC Seriously dude how do you sleep at night? http://t.co/etytwKV9

Some are still falling for the deception. Perez Hilton just posted and tweeted about it this afternoon, even after the video was proven to be false.

Ha! RT @MittRomney Tries To Get A Crowd Of Supporters To Chant His Name…And Fails Miserably http://t.co/aKfCHFJQ

At the end, he writes:

Based on the priceless reaction from Joe Scarborough, the Republican host of Morning Joe, the moment was a far cry from “great.”

You know what else is a far cry from great? Lying liar who lies, Joe Scarborough.

He doesn't. RT @indyrallen @lessat @adamsbaldwin Yes. We will see if @joenbc has any integrity.

Yay! Rush is talking about the Romney/Ryan chant. Hopefully @Oreillyfactor & @specialreport will pick up on it too #MSNBCManipulation

These lapdogs need exposed every time.

You can contact MSNBC here and ask them about their Romney/Ryan video manipulation (story here: http://t.co/LtVsaYw9) http://t.co/mGrhv27d

Enough. The Fourth Estate is completely insolvent. Time to pack it in, lapdogs.

The fake controversy over the Ryan chants is a joke. Romney said "What a guy!" The crowd chanted "Ryan!" and then Mitt jokes "Romney/Ryan!"

Really? That’s all you can come up with? You double face palmed. Why would you do that if that is what you referring to originally? What on earth would be face palm-y about that? Why would you say “sweet Jesus” for that? You can’t even lie well, dude.

He continues stomping his little feet.

I won't even dignify the site that is fanning this false controversy but I will take note of those who link to the lie.

Oh noes! He’s taking note! We are quaking in our super cute shoes. Of course, it’s quaking from giggle-snorts, but still.

Expect to hear the tape again on Monday.

I'm going to have the tape linked this weekend. You watch and be the judge. We will also play the CSPAN tape on Monday. Going to be fun.

Why? Will you be “editing” some more?

Morning Joe Spox: "Joe and the gang apologize for making people laugh in the morning." http://t.co/NzlwqOCq

According to “Morning Joe” spokeswoman Lauren Skowronski, you guys just don’t get the program’s playful brand of “humor.” Really:

This story is an attempt to generate a false controversy. The tape clip was untouched and was played as it was recorded. The panel was responding to Romney’s playful response and having fun with it. Joe and the gang apologize for making people laugh in the morning