‘Come to my office and kiss my …’ Sen. Rand Paul ANNIHILATES ‘snot-nosed censors…

Yesterday, Israeli PM Benjamin Netanyahu addressed the UN General Assembly. Common sense — and decency — would dictate that Susan Rice, the U.S. ambassador to the UN, would be present for such an occasion. Rice, however, felt differently. Her empty chair stayed behind to take in the speech while she slipped out for lunch with Hillary Clinton. Priorities! What’s one of America’s most important and faithful allies when a Cobb salad is on the line? Not much, apparently.

Fox News’ Greta van Susteren discussed the snub with our former UN ambassador, John Bolton. Both saw it as a bad move on Rice’s part, a move particularly troubling in light of the treatment Israel has received from the UN and from our own president. Bolton called it “simply one more brick in the wall of the case that the president’s perfectly prepared to isolate Israel and that he does not hold the U.S.-Israel relationship in the same regard high regard as every other president going back to Harry Truman.”

So…Susan Rice was not at Netanyahu speech nor Hillary Clinton….#keepingitclassy

Bad manners ? Rice goes to lunch while #Netanyahu speaks ? This admin is DESPICABLE

If its true, and I'm not doubting it, that Ambassador Rice walked out on Netanyahu speech, she's scum and the crap I scrap off my shoe!

this whatever needs to go right now, she is nothing but a farce living off the taxpayer dime for doing nothing! http://t.co/f1pdfLNC

WHY aren't the MSM's berating Am.Susan Rice as #emptychair during Netanyahu speech?Had lunch with Hillary Clinton & other officials instead.

Most embarrassing Administration ever: UN Amb Rice disses Netanyahu speech at the UN, fails to do her job or show up http://t.co/iSTgE3iX

Disgusting & no excuse she lost some of my respect RT @TarynOnthenewsVideo: Rice skipped Netanyahu speech at the UN http://t.co/q3QFvXNz

There certainly isn’t any excuse, though a few Twitterers offered up some that Rice might try for:

Susan Rice couldn't be at Bibi's speech because she had to go to a movie.

Or watch a video, mayhaps?

As disgusting as Rice’s lack of respect for Israel was, it’s par for the course in the Obama Administration. Hillary herself blew Netanyahu off to canoodle with Palestinian president and terrorist sympathizer Mahmoud Abbas: 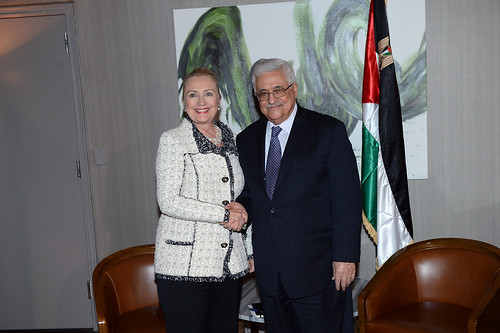 And lest we forget, President Obama is the grand poobah of dropping Israel to keep up with the demand for eye candy. So really, Rice is just following in his footsteps:

So.. Obama blows off Netanyahu and doesn't even have the decency to have our UN ambassador sit for Bibi's speech? http://t.co/tnHTljWU #tcot

They’re sending a message, all right. And that message is “screw Israel.”