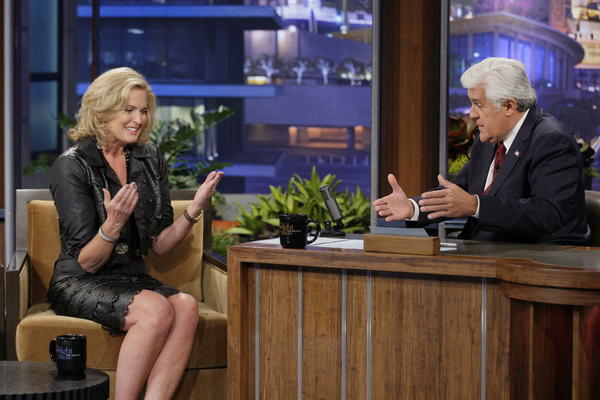 Odd, we thought libs were all about the biker chicks.

As always, class warriors came armed with breathless kvetching about the price of Mrs. Romney’s clothes.

The left's best attack against Ann Romney is her "expensive" clothes. You'll also notice these morons retweeting celebrities soon after.

I know next to nothing about women's fashion, but I'm fairly sure that leather outfit cost more than I make in a month. #AnnRomney #Leno

an ugly outfit that she prob paid waaay too much for RT @Toure RT @profblmkelley: Ann Romney is wearing what on the Tonight Show????

Eventually libs dropped their obnoxious sartorial policing to focus in on one terrible, no good remark.

Asked by Leno to reflect on the significance of the first Mormon president, Mrs. Romney said she hoped that if her husband were elected, “We would see more of the same, that prejudices are left behind.”

How dare Mrs. Romney even mention anti-Mormon prejudice? That’s not real prejudice, you see. That’s just completely fair and rational examination of a candidate’s background (if you’re a lib). And besides, the Romneys exhale bigotry with every breath. Or something.

Poor @anndromney having to face prejudice! I wonder how many country clubs the Mormon was denied entry to. #ShutUpAnn http://t.co/cgISwbbW

Right , a Mormon prez who lies about welfare to bait white people to vote for him. Right: a vote agaunst prejudice. #Romney

No Ann Romney, a female lesbian muslim and a male gay jew as prez and veep would show prejudice had been left behind. Mormon? Not so much.

Ann Romney says that electing a Mormon president would show prejudice is in the past. Coming from the guy who wants to outlaw gay marriage.

'Ann Romney: Election of a Mormon president would be a signal that 'prejudices are left behind.' She has NO clue what PREJUDICE is

@AnnDRomney ur so fake u want to see prejudice left behind.. u guys hate gays!! #shutup

@AP @APCampaign – That made me laugh out loud since since prejudice & inequality are hallmarks of the Romney/Ryan campaign!

Ann Romney on Leno; said wants to "leave prejudices behind" if her Mormon husband is elected. Isn't not allowing gays 2 marry a prejudice?

Apparently I missed the Duchess Ann Romney, dressed in black pleather? How did she manage to pull it up over the magic undies? #P2

Prejudice? Unless Mormons start wearing magic underwear on the outside of their clothes, we don't know who they are. http://t.co/1oeahQey