‘Testy!’ Biden berates reporter for quoting what he said about opponents of ‘voting…

President Biden seems to be undermining the legitimacy of the upcoming election, which is a threat to…

Who wants to tell him? Biden blames Republicans for blocking his agenda

‘Sheer lunacy’: Biden says his first year has ‘outperformed what anybody thought would…

CNN: Focus groups are saying President Joe Biden is coming across as ‘old and absent’

‘What are you doing?’ In bizarre twist, sketchy Parkland dad Fred Guttenberg sets his sights…

‘Game over, NPR’: Chief Justice John Roberts hammers what should be the final nail into Nina…

Chaos and violence continued to spread in the Middle East today as a mob shouting “death to America” stormed the U.S. embassy compound in Sanaa, Yemen, setting fires, burning the American flag and looting the embassy.

Egypt, Libya, Yemen — how many more attacks on American diplomatic missions will we see before President Obama starts bothering with his intelligence briefings? How many more murders of American citizens?

But, you know, as he told a cheering crowd in Vegas, he had a “tough day.”

More from the AP:

The protesters breached the usually tight security around the embassy and reached the compound grounds but did not enter the main building housing the offices. Once inside the compound, they brought down the U.S. flag, burned it and replaced it with a black banner bearing Islam’s declaration of faith — “There is no God but Allah.”

Before storming the grounds, demonstrators removed the embassy’s sign on the outer wall, set tires ablaze and pelted the compound with rocks.

Another photo of protesters trying to break through the second gate at the US Embassy in #Sanaa, #Yemen pic.twitter.com/uDF6C7al 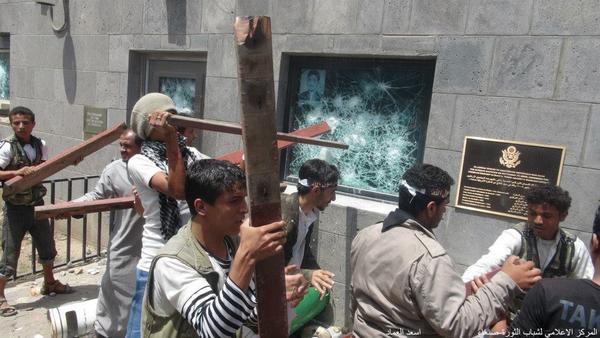 #Yemen | Photo : American flag at US Embassy #Sanaa replaced : "There is no god but Allah & Muhammad is His Messenger." pic.twitter.com/aMn07UFl

Outside the #US embassy in #Yemen now! pic.twitter.com/TG480KjP

#PHOTO: Yemeni protesters storm US embassy in Sanaa, before being pushed back by police: pic.twitter.com/M5x4EJnN 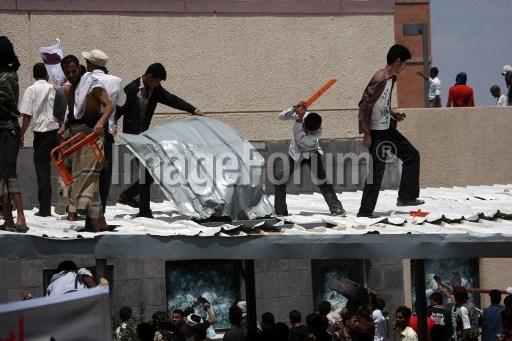 A protester stands in front of a burning tyre by the US Embassy in Sana'a this morning: http://t.co/jCBSUfTV

No casualties have been reported yet:

Journalist Adam Baron was on the scene this morning.

I'm somehow inside the security perimeter at a parking lot run by friend of friend. Can see soldiers launching tear gas #yemen

And now we have shots being fired in the air. #yemen

In addition to securing embassy, seems someYemeni troops also have time to try to shake me down for cash. #yemen

Guys I'm with say some demonstrators were able to enter embassy from Sheraton street. #yemen

@nefermaat, myself & a friend just returned from the #US embassy where we wanted to film & take photos of what was happening #yemen

outside #US embassy in #Sanaa central security pointed a gun at @nefermaat beat him up with batons & wanted to confiscate his camera.

Tear gas, gun shots, & smoke filled the area outside the #US embassy in #Sanaa #Yemen

a protester outside #US embassy: "Those who stormed embassy were thugs who used protest wanted to steal, not to make a statement" #Yemen

according to protesters there were two groups of protests in front of the #US embassy, one started at 8, another at 10 a.m. #Yemen

Naturally, the lapdoggies at MSDNC are focusing on what really matters as violence continues to erupt.

Almost like the folks at MSNBC are excited by the Yemen attacks because it will keep the "Romney story" alive.

But what about Mitt? DID ROMNEY APOLOGIZE??!?! RT @maggiepolitico: Yemen's pres. apologizes to Obama for embassy attack.

Meanwhile, Egypt’s president is urging legal action in the U.S. against the makers of the Mohammed film.

And protests have spread to Iran and Bangladesh.

Twitchy will monitor the situation in the Middle East and update as developments occur.

President Biden seems to be undermining the legitimacy of the upcoming election, which is a threat to democracy