It’s not like there is anything else going on, right? Even on September 11, President Obama couldn’t muster up any sort of presidential behavior. It was bad enough that his lapdogs over at NBC chose to air a Kris Jenner interview rather than have a moment of silence. But, no! President Obama had to one-up them and chose to appear on “Pimp with a Limp.” On September 11.

But “Pimp with a Limp” is just the tip of his priority-driven iceberg. Hey, didn’t Obama also just snub Israeli Prime Minister Netanyahu due to “travel conflicts?” Guess what those conflicts entail?

The Middle East is exploding, but Obama can't make time to meet Netanyahu. On his schedule: Letterman & "Pimp With a Limp." #Caring

Obama: And now, I'll take one question, from DJ Laz, the Pimp with the Limp

Yesterday, in btwn snubbing Israeli PM and apologizing to Islamists,Obama found time to talk to the "Pimp With A Limp."http://t.co/PQP0QvNP

Yesterday, as the plotted attacks were getting underway, was Obama coordinating this nation's response with Pimp with a Limp?

Yes, something else happened yesterday. While the press would have you believe the most pressing issue of our time is a Romney statement, what actually happened is that our embassies were attacked. And Ambassador Stevens, among others, was killed. Surely President Obama will now be focusing on that, right?

Obama has no time for Netanyahu, but he has time to attend Jay-Z, Beyonce Fundraiser. Yes indeedy! #tcot… http://t.co/Wc4MNBGC

So the Middle East is exploding, our ambassador is murdered, and Obama is heading to Vegas to campaign?

The MSM threw a fit every time Bush went to his ranch in Crawford. Obama goes fundraising in Vegas after an ambassador is killed: *CRICKETS*

It’s a pity that he can’t stay there, like everything else stays in Vegas. Of course, Obama also has time to slam Romney while jet-setting. Ace of Spades takes him, and the media, to the woodshed, natch. And it is beautiful.

RT @joshledermanAP: ABOARD AIR FORCE ONE (AP) — In wake of Libya attack, Obama says Romney has a tendency to shoot first and aim later.

Let me fix that for you: EN ROUTE TO A LAS VEGAS POLITICAL FUNDRAISER, Obama says…

Obama must be planning Top Secret shit in Vegas, because everyone knows What Happens in Vegas Stays In Vegas.

Four already dead and now the U.S. is evacuating personnel from Libya.

BREAKING: US evacuates all personnel from Benghazi to Tripoli, report says http://t.co/OSjaRn9E via @foxnewsalert

as US evacuates all personnel from Libya, Obama jets off to Las Vegas for a plush fundraiser with the stars.

@AceofSpadesHQ The msm wanted the RNC to delay the conv 4 Issac, but apparently have no problem w/ an Obama fundraiser on today of all days

Media then: The optics of Romney's convention during a storm show a lack of judgment Media Now: Hey, Barry, put $30 on Number 15 for me!!!

Was there a single death due to Isaac? Yet ABC news director whined about "black people drowning."

A US ambassador & 3 others are murdered in what appears to be a coordinated terrorist attack, and Obama's splitting 8's in Vegas.

Let me repeat this: Four Fucking Human Beings Obama is responsible for are DEAD, and the media has YET to ask a single question about this.

What appears to be a coordinated attack with the potential for more attacks. Evacuations, deaths and Obama is hitting the strip. And the media? Crickets, except for when they are trying to slam Romney for Obama’s failure.

Telemundo’s José Diaz-Balart is all twitterpated about Obama’s visit to Vegas and can barely contain his excitement about landing the only interview with President Cool:

I will interview President Obama tonight in Las Vegas. Watch for it on Telemundo, @NBCNews and @msnbc #ObamaTelemundo 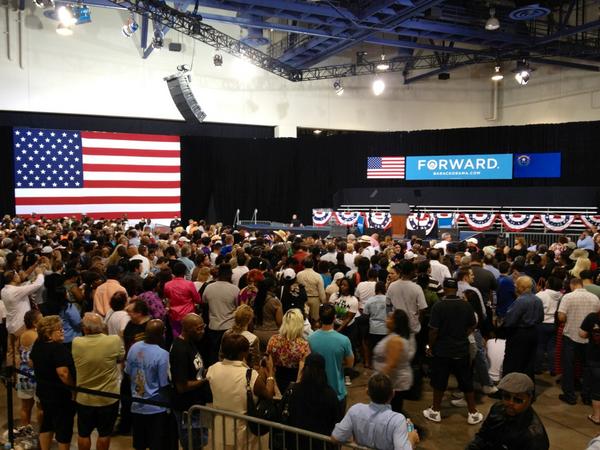 The squee is strong with this one. But Diaz-Balart isn’t the only one quivering with antici … pation:

Obama in vegas!? Im bout to go party wit dat nigga, i kno he getn fuckd up b4 election.

Obama has landed in Vegas. Pulled over to watch on my way home. pic.twitter.com/ApT0S9a0

My Ma is so excited! Shes going to see President Obama in Las Vegas, she boohoooed for the tickets, happy for

Super close in the VIP section to hear OBAMA speak! Thanks @OFA_NV!! so excited! #unlvstudentsforobama

The event hasn’t actually started yet, but one Twitterer was able to grab a quick snapshot of the president getting ready for the shindig:

Have a picture of Obama in Vegas already #EmptySuitEmptyChair http://t.co/X7cv5HjD