Oh, how much longer can the media’s pom-poms hold up? They must be near falling apart due to overuse! The junior high poet Rick Klein started off the spin last night with the “rising above,” dreamy sigh, “disdaining the process” nonsense. Then he doubled down with this.

A president and his crowd. #dnc2012 pic.twitter.com/8Y9whozL 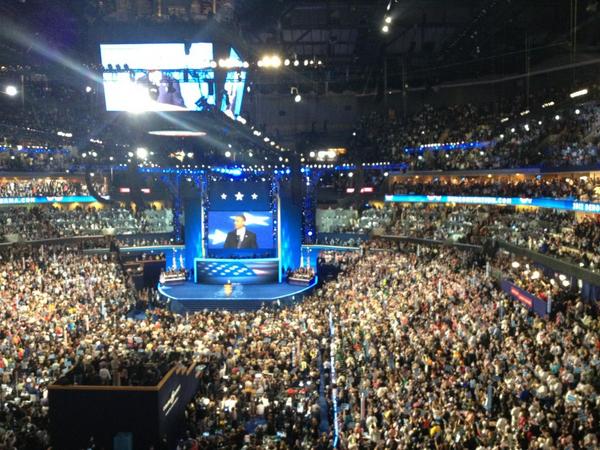 You just know that photo will be blown up and hung on Rick Klein’s bedroom wall.

His crowd. In a much smaller venue. Funny, he doesn’t show this picture.

Mom-hater Hilary Rosen tried to drum up some soaring rhetoric swooning during the speech.

Here comes the soaring. President Obama takes us higher now. "My fellow citizens, YOU are the change" #DNC2012

Alas, even her sonic speed spinning wasn’t enough. The Greatest Orator alive isn’t so great. And the enthusiasm is nowhere near Greek columns level.

So, what are the media lapdogs to do? Decide the non-soaring was on purpose! See, he’s rising above and sober and stuff.

Solid, substantive but not soaring: Obama’s DNC Speech: A Sober Call to Arms http://t.co/nW8XrYOO via @thedailybeast

He totally meant to do that!

The speech was solid, not great; advisers now say Obama had to dial it down or get killed for lack of substance

President Obama had to dial down. If it were up to him, he’d have been his oh-so-awesome self. He’s a giver, you see! Didn’t want to humiliate the masses with the full extent of his awesomeness. Other journalists quickly jump on the spin. Thank goodness! They had nothing and were desperately trying to come up with angles to help The One.

Editor and president of the Madison chapter of Professional Society of Journalists. You know, those “real journalists.”

As suspected! She’s so smart; only you dumb bitter clingers wouldn’t realize the president was “dialing down” on purpose.

@HowardKurtz Did anyone think it was an accident?

See? You stupid rubes. He follows it up with some more embarrassing cheerleading. He may make captain of the squad, soon!

Yes, a "fired up! ready to go!" chant, followed by a "four more years!" chant did just erupt at the Charlotte airport A concourse. #DNC2012

cc: all journos who complained about speech. Apparently O knew what he was doing @postpolitics Why Obama dialed it down http://t.co/dzLPDge6

Y’all just don’t get the nuance-y nuance. Luckily, Obama knows all. People who live in the real world, and who understand the true nature of the journalist species of lapdog, aren’t buying it.

@HowardKurtz So, I want to get this right — you're being told POTUS *deliberately* dialed down his speech?

There will be an extra bone in your lapdog bowl tonight, Howard!