As Twitchy reported earlier, the young and the shiftless have descended on Philadelphia for the five-day Occupy National Gathering. It’s day one and the non-violent peaceniks with hearts of gold are already putting a strain on local law enforcement. 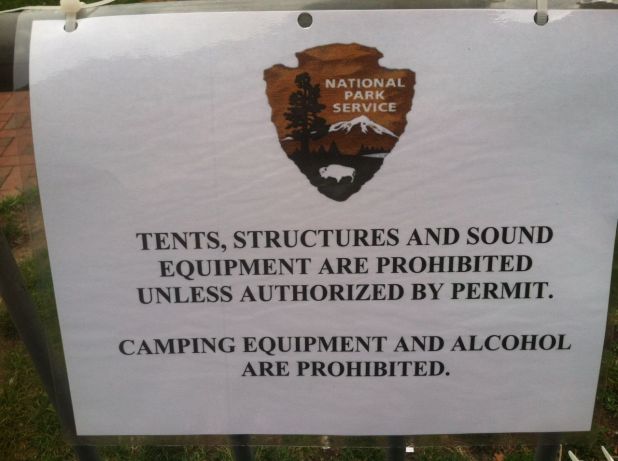 Police State – when you're arrested for doing something that the cops told you not to do. #NatGat

#NatGat How is it a police state when you are the ones who break the law. Don't want to be pepper sprayed then don't mouth off to the Cops

Violent Pigs pushing back against @occupy in #NatGat, Occupiers continue to assert their grounds and say no to repression…

Several conservatives tweeted while watching streaming video of the protest.

Somebody at #NatGat is saying "can you round up the troops and be ready to deploy?

Livestream guy had recorded occupiers assaulting cops.. but "accidentally" deleted it… what a coincidence. #NatGAT

Many Occupiers tweeted during a confrontation that began when they refused to comply with camping regulations:

Suddenly, a tent has appeared. and park defense gets fucked with police assaulting occupiers over a tent. #NatGat

Park police have made an arrest at the #NatGat

Protester being carried out by police at #natgat. (live at http://t.co/S8tYIlie)

Three vans pull away, six more vehicles come in to replace them. Tent has been taken down, police confrontation continues. #NatGat

Now can we go have that conversation about whether or not the pigs deserve respect? #NatGat #FTP ( #OCCUPYSF live at http://t.co/rwzrW4Vn)

"Whose park, our park" Protestors are pushing police out of the park. #natgat #ows #occupy @occupyNG (live at http://t.co/S8tYIlie)

Another tent has appeared. Police seizing loose bags. And watching that tent, nightsticks out. #NatGat

Police stole tent as owner was taking it down. Thief! Thief! #NatGat #ows

The police have apparently said we can stay in the park on condition of no tents, no sleeping. #NatGat (live at http://t.co/yN3mMugp)

Listening to 25 cops in b-proof vests discussin choosing their battles wisely. Theyll be on patrol all nt. Did you remember ur vest? #natgat

Overheard that police have called for backup @ #NatGat suggest we change tactics.

Philly Police are doing an awesome job, and Captain Lewis is in the crowd, and yet.. everyone's yelling F the police.. #natgat

But the Occupiers in Philly this weekend aren’t too interested in that perspective as they march on the jail.

"Against the system we will rail, until our comrades are out of jail!"#NatGat #ows #Solidarity

Remember, this is just the first day of an occupation that lasts until July 4. And the day’s not quite over.

Time to occupy lockup for the night.

Oh BOOHOO! J.K. Rowling OWNS PinkNews CEO for playing the victim when she fact-checks him after he’s harassed her for YEARS